“Where’s the kitchen then?” asked their friend, a professional chef, as she walked through the newly installed ALNO kitchen at the Hampshire home of Stuart and Valerie James. They could not have been more delighted with her comment.

After all, the highly reflective glass units concealing endless cupboards to hide everything away and vast expanse of mirror to throw the visitor’s attention onto the garden were the epitome of minimalism and their friend’s reaction was just what they hoped for.

When Valerie moved into the 1970s detached villa in Bentworth, near Alton, the property left a lot to be desired. ““It was so awful, I put newspaper down on the floor before we unpacked,” she says. Valerie and her husband Stuart, a massage therapist, have recently enlarged the property, building an extension to house the new kitchen/dining room. Stuart comments, “We wanted to give the house a heart, a nucleus it didn’t have before.”

When it came to choosing the kitchen, the couple knew they wanted a minimalist look, but were unsure how best to achieve it. That changed when Valerie completely by chance came across Hampshire Kitchens in Alton. “I remember the day I wandered into the showroom, walked up the stairs and there was Jerry at the top smiling and chatting away.”

Jerry Craven, owner of England’s longest established ALNO dealer, was in his element on this project. “Mr and Mrs James had some fairly clear idea of what they wanted. We designed the layout and agreed with them that the handleless look would be perfect for their needs – shimmering, flat surfaces the epitome of elegance. Keeping the surfaces clean and tidy – that meant lots of cupboard space and built-in appliances. We even designed a specific unit for the utility room to conceal the clothes airer.” 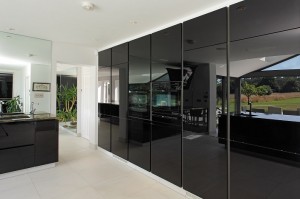 Jerry designed the  kitchen layout using ALNO Star Vetrina – high gloss, black glass finish units and black glass end panels. The two ovens and induction hob are Neff and are finished in matching black glass. In the island unit, there is a preparation sink with a tap that can provide filtered water, whilst in the run that contains the hob, there is a double sink with a mixer tap coupled to a Quooker Combi – providing water at 60 degrees and boiling respectively. All sinks are finished in black ‘Teflon’. Above the induction hob is a most imposing 800mm Elica ‘Leaf’ black glass cooker hood.

At one end of the room are a series of units with a Caple wine fridge in the centre and blacck glass sliding shutters concealing illuminated glass shelves.

“Jerry came up with exactly what we wanted” Stuart says. “We saw several other prestigious firms who were pretty unimaginative, but Jerry can think outside the box.” They also worked with a specialist lighting consultant to grt the lighting just right. But Valerie and Stuart had the idea for the colour changing LED strip which adds a magical touch to twilight dinner parties.

One of the James’ main concerns was to bring the garden into the house. Massive bi-fold doors open out onto the garden and several beautifully arranged trees in elegant white pots dot the dining area. The finishing touch that brings it all together though is the specially imported, Brazilian green bamboo granite work surface which complements lush reflections in the black glass unit doors of the James’ immaculately kept lawn.

The other governing factor was Stuart’s love of music, so the breakfast bar contains a bespoke cupboard housing high quality sub-woofer speakers. The unit hides the speakers completely while providing both access and ventilation, resulting in excellent sound quality.

Valerie and Stuart are adamant that Hampshire Kitchens provides more than just great designs though. “It’s the after sales service that’s key when you’re buying anything,” says Stuart, “And Jerry has been great throughout. Anyone can be nice and helpful when things are going well; it’s how they solve problems that counts.”